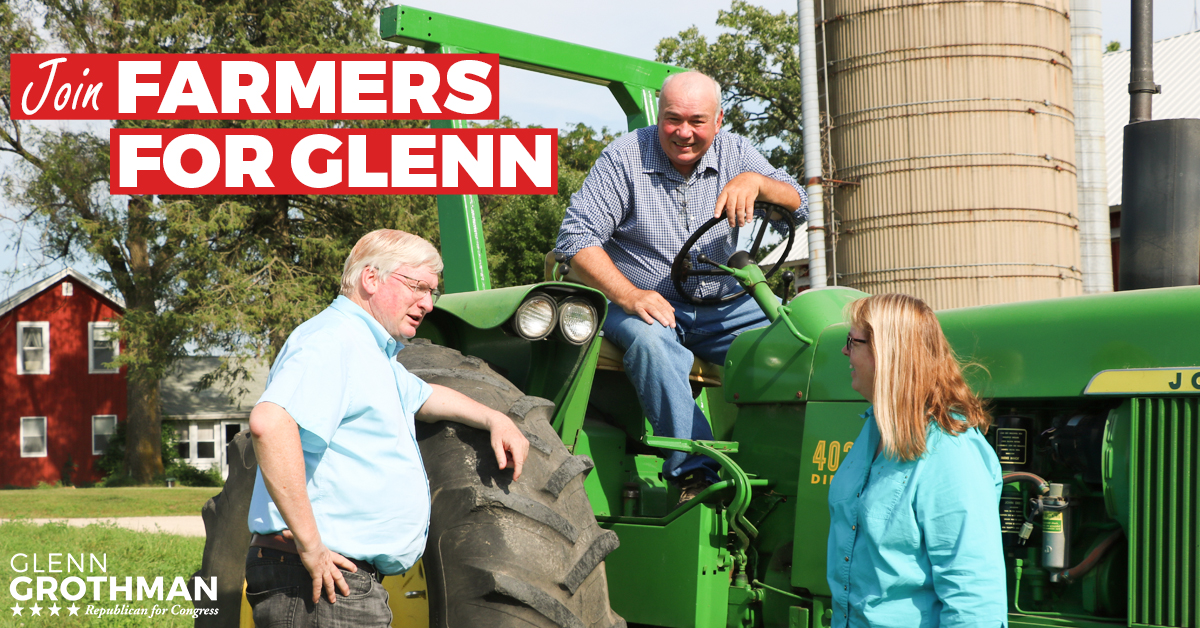 Wisconsin’s 6th Congressional District has a long history of farming, both livestock and  crops and is also a major producer of milk. Our farmers know they need a representative who understands the needs of the agriculture community - that’s why so many farmers support Glenn. Recently, Glenn received the “Friend of Farm Bureau” award which is presented by the Wisconsin Farm Bureau Board of Directors, which highlights their commitment to protecting and advocating for the agricultural community.

The Washington elites keep proposing and enacting regulations that threaten the livelihoods of Wisconsin farmers. The federal government has consistently imposed top-down, nationwide restrictions that regulate the farmers of our great state. Glenn has voted for legislation that strikes down these unnecessary regulations put forth by the EPA, such as the Obama administration Clean Water Rule, which violated private citizens’ property rights by giving the federal government the power to regulate water features in someone’s backyard. These problems need to be addressed on the local and regional levels, not a one size fits all approach, something that Glenn has constantly fought for.

Glenn has worked alongside farmers to ensure greater sustainability and protection of dairy and crop farmers throughout our district. In doing so, he is protecting the tradition of generational farms that play a major role in our state and national economies. In the 6th Congressional District alone, 96% of farms are family farms.

Glenn has fought alongside President Trump to ensure our farmers are provided with increased markets for their commodities, which has been done through the new North America trade agreement - USMCA. Leaders throughout the country know that USMCA updates the severaly outdated Clinton administration North American Free Trade Agreement (NAFTA), and is benefiting workers in all sectors, but most importantly the Wisconsin agricultural industry. USMCA is the solution we need to promote free trade, economic growth, and above all else, the livelihood of our farmers within the 6th Congressional District.

Glenn is committed to prioritizing the future and lasting success of the agriculture industry in Wisconsin. Some of the legislation Glenn has championed in Congress is listed below.

Many farmers have already joined the coalition supporting Glenn including:

I'm a farmer for Glenn and would like to join the team!